EventMeasure is a program used for logging and reporting events occurring in digital imagery. It is specifically designed to allow fast, efficient analysis of movie sequences, and particularly for recording biological information and animal behaviour in underwater movie sequences. The program supports a variety of still and movie image formats, and events are recorded by overlaying dot points on imagery and assigning attributes to those points. EventMeasure dynamically analyses recorded events and reports abundance measures such as MaxN, cumulative MaxN and mean count (both by species and stage).

The software allows the user to load predefined files of attributes and to edit and automatically add to attribute files as imagery is analysed. EventMeasure supports a user-definable file for family, genus, species and code information (generally CAAB codes are used in Australian applications). In addition to the attributes that can be assigned to dot points, EventMeasure has 12 user configurable information fields. These information fields are usually configured to record general survey information (depth, location, observer details, etc). All attribute information and measurements can be exported as database tables or generic text files suitable for importing to spreadsheet or database software for further analysis. EventMeasure incorporates a movie player with fast forward playback and stepping functions to provide efficient analysis of movie footage.

EventMeasure allows the capture of reference images in either still or movie format, with the identified individual highlighted by a dot. The software has a built in viewer that allows reference images to be recalled and viewed.

EventMeasure supports the importation of point annotations (for abundance) and measurements for 3D position and size that have been derived outside the software package, typically from machine learning/AI output. 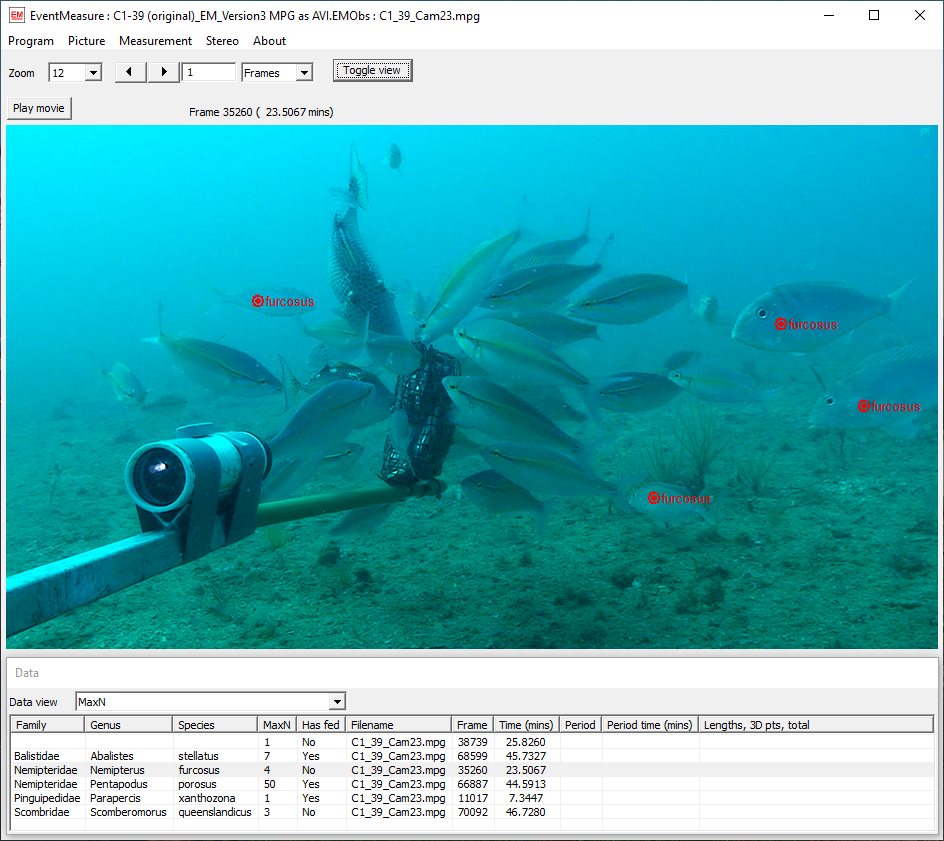 The most common applications of EventMeasure are analysis of stationary camera surveys (typically known as 'BRUV' or stereo 'BRUV') and anlysis of fish transect surveys (often diver-based, but also ROV or AUV mounted cameras systems). EventMeasure is also widely used in the following applications: